Everything You Need to Know About Staingate 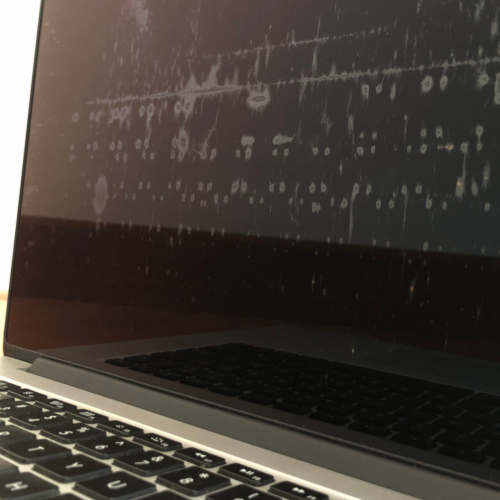 "An odd choice to add a guaranteed weakness to their product lines."

"So, what is staingate exactly?"

A very good question if you're looking into purchasing a Mac any time soon, especially a refurbished product. Staingate is the term for a common cosmetic fault that many of the recent Apple laptop ranges suffer from. It all comes down to the anti-glare layer that is applied to the glass surface of the screen. Over time this layer suffers from a process of delamination and parts of the coating begin to come away, leaving noticeable blemishes on the display surface. This does not affect the functionality of the laptop but does look unsightly; particularly in more severe cases.

Whilst Apple has not currently acknowledged the issue on ranges after 2017, we have found they still suffer from exactly the same issue. This is because Apple does not appear to have changed the coating, at least in any way that prevents the issue from occurring down the line.

Even with the redesigns of the MacBook Pros in 2016 and the MacBook Airs in 2018, their coatings appear to be exactly the same and so even 8 years on, staingate is still a problem for many users of Apple laptops, especially with MacBook Air users now sharing in the woes of its more powerful sibling.

"What Can Be Done About It?"

Your first thought is probably how this is still a problem eight years on and you'd be right to question. Apple's response has, to put it bluntly, been lacklustre. It took over a year from the community discovering staingate for Apple to begin launching a display replacement program for its customers and even this was rather begrudgingly and more under legal pressure than anything else.

Even with two full redesigns to their laptop ranges since then, they have continued to use this coating design which is almost certain to eventually break down. An odd choice to add a guaranteed weakness to their product lines. It is likely however that they have looked into changing the coating in some way but whatever options are currently available to Apple do not seem to be viable to them for one reason or another.

Speculation aside, Apple did open a replacement program. This originally covered more of the older models but as they became 'vintage' they were removed from the coverage of the program. Now the program covers MacBook Pro 2015-2017 machines (both 13" & 15"), as well as the 12" MacBook ranges up to four years from their date of manufacture.

To be clear, this is because

The new MacBook Airs are NOT covered as of the writing of this, but their problem with staingate is not widely reported yet so as time goes on it's likely Apple may add them onto the list of eligible models as customers discover the problem.

Unfortunately, this does render many MacBook Pros and some MacBooks ineligible to be repaired for this very common problem. So, what can you do about staingate when Apple won't cover the problem you may ask. Well, you have three options left really. Continue on with the staingate as it likely deteriorates (depending on usage the speed of this varies wildly), pay to have your laptop display replaced, OR remove what's left of the anti-glare coating completely.

At the mere mention of removing a coating from the display, the average user may be rather unnerved but there is little to fear. This process has become a rather common solution and with some time and elbow grease, you should be pleased with the result. There have been many different suggestions for the best substance to use to remove the coating ranging from isopropyl alcohol to baby wipes and even fine cutting/polishing compounds. Some of the hard work and time can be reduced using a Dremel or electric drill with a polishing head but we have generally found that it's better to do it by hand with a soft cloth, especially if you are only doing one screen.

Removal of the anti-glare layer will naturally bring more glare to the display but it does leave the actual surface and image exponentially clearer. No longer do you have to read webpages through the shiny green haze of staingate or see the imprint of your keyboard keys across your display constantly. Instead, you can simply read and work from a clear, bright and somewhat shinier image, just like the good old days when your MacBook Pro was new and shiny.

Here's an example of the before and after with the staingate removal process: 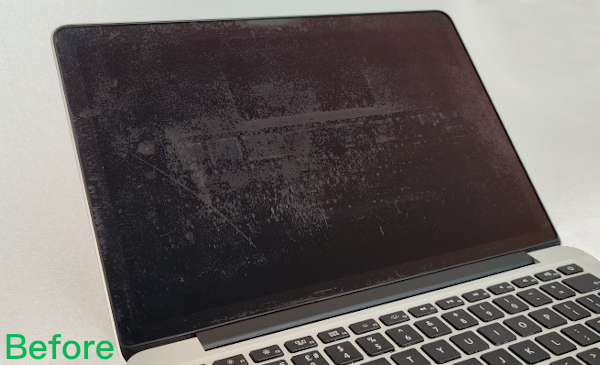 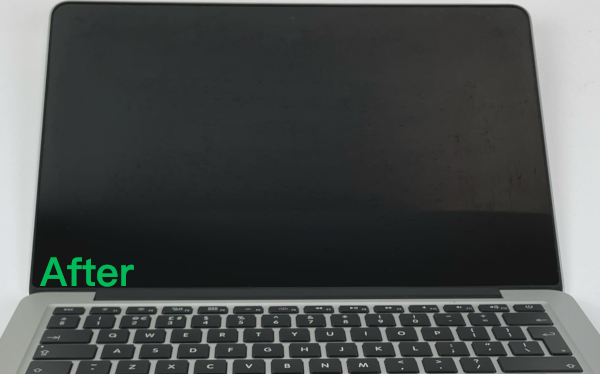 It is important to note that this process is not 100% perfect. We may conjure up fond memories of a brand new machine but we must stress that removal of staingate, while an excellent solution, may not typically clear every single speck of the coating. Typically on the very corners and edges, some bits of the coating can be very stubborn and there are occasionally tiny specks of the coating remaining but these are almost always off the visible area so these do not affect the image you will be using. It may not be a brand new display but it's a very small price to pay for what is essentially a much clearer image overall.

We've been dealing with Staingate here for many years now and each year we hope to see a change or fix but alas, it has yet to be realised. As the years go by, we see more and more delamination at a very advanced stage and it's a very unappealing visual defect. As a result, we decided to start removing what's left of the anti-glare layer with considerably more frequency than we once did.

As you can see above, we think that removing the layer just makes a world of difference. Yes it may show some light scratches more and be more reflective but staingate reaches a point of almost being unusable and this is a serious improvement.

If you're on our refurb store then keep an eye out on the MacBook Pro listings for a message highlighted in green which will tell you if the laptop has staingate OR its staingate has been removed. If you see no message anywhere then the machine is not suffering from any staingate currently. If a refurbished product has even a small amount of staingate we will make this clear in the listing.

Staingate is undoubtedly a very widespread problem and it goes without saying that eventually, the anti-glare coating will begin to break down on the ranges we mentioned as long as a machine is used. In storage, it should never occur as it appears to be down to two things. The keyboard pressing into the coating every time the lid is closed and regular or excessive cleaning of the display. We cannot confirm a lot of cleaning is a root cause but it's very likely as it's only rubbing down this delicate coating again and again until it eventually begins to delaminate, just like the keyboard keys seem to do via repetitive friction and contact.

If your display is suffering from staingate and you believe your machine may be eligible for a display replacement we highly recommend taking it in to an Apple service provider. As long as nothing else is wrong with the machine and nothing has been tampered with, it will likely result in a new display. This is a great option to look into before it gets too late and you'll have to resort to the option of removing the layer yourself when the degradation becomes too severe. A new display from Apple is always the best option if it's possible and it costs nothing to try it.

So, here is the full list of machines currently in Apple's replacement program (subject to the 4-year limit):